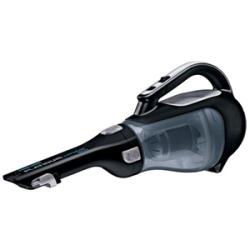 The Black & Decker BDH2000L handheld vacuum is getting good ratings from consumers. But like most other good handhelds it is not cheap and presently costs in the neighbourhood of $90.  It is powered by a Lithium Ion battery which provides a respectable run time and the unit also charges more quickly than some of the older handhelds.  In general owners are pleased with the BDH2000L although there is some discontent regarding the noise level.

A table of consumer ratings is shown below.  The bulk are from Amazon but a few others were also found.  These create and average score of 85 out of 100 or about 4.25 stars out of 5.  You can compare this score to those of other handhelds in our table of handheld vacuum ratings.

The last Black & Decker handheld we looked at was the Lithium Ion Dust Buster CHV1410L (a 14.4 volt Lithium Ion powered handheld).  These machines are quite similar and they even get similar ratings from owners.  But the CHV1410L is slightly less expensive than the BDH2000L and it has 23 air watts of power as opposed to 24. 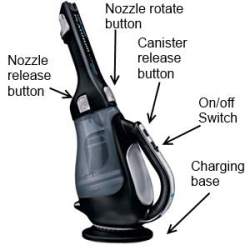 Unit in it's charging base

The Black & Decker Platinum BDH2000L is cordless and powered by a 20V Max Lithium Ion battery that can hold a charge for up to 1.5 years. A lithium ion battery has several advantages over a NiCd battery (often found in less expensive or older handhelds).  Lithium ion batteries have a high energy density, lose their charge very slowly when not in use, and do not have memory effect. Memory effect occurs in NiCd batteries and results in the battery losing its maximum energy capacity over time if it is repeatedly recharged after only being partially discharged.

The BDH2000L includes a charger and charger base with Smart Charge Technology which, according to Black & Decker, uses less energy and helps to prolong battery life.  Black & Decker recommends the battery not be left discharged as this diminishes battery life.  They also suggest always returning the machine to the charger after use.  The battery can be left in the charger indefinitely without harm.  The run time for the BDH2000L on a full charge is about 10 minutes but some owners report longer run times.

A review of consumer comments from around the web reveals the following common likes and dislikes: 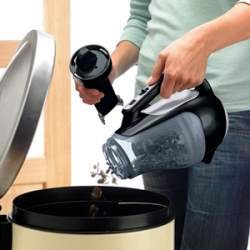 We were somewhat surprised that most owners seem satisfied with the recharging time and the run time of the vacuum.  With cordless machines this is often not the case, although perhaps with handhelds consumers are a little more forgiving as they are not often used for long periods of time (at a stretch)  at least compared to a stick vac.  There were also a few comments that the dust canister can be a bit loose and some folks worry that it could detach and fall to the ground.  But this wasnt a common concern.

The vacuum has an extremely bright charge indicator light which some people claim can almost light up a room.  In some instances owners report obstructing the light with tape or another material in order to diminish the glow.  The light is functional however and it begins to flash when the battery is getting weak  indicating it is time to charge the vacuum.  When the unit is fully charged the light stays lit continually.

Both are useful and work reasonably well although the crevice tool does not click into place and it can sometimes be pushed back in too easily.  The nozzle can also be rotated, and it does click into place.

Like most bagless vacuums the Black & Decker uses cyclonic technology which spins air rapidly thus removing the dust and debris from the air path.  This approach helps to keep filters clean (and has no bag to impede suction).  The BDH2000L generates 24 air watts of suction.  There are two filters in the vacuum  a plastic pre-filter and cloth quick-clean filter.  Both are washable.   The replacement filter model # is VF110FC (filter with agitator)  see item to right.

A short Black & Decker commercial is provided below.  It is not particularly insightful but it does at least show the machine at work.

Vacuum Manual
You can view the manual at Home Depot here.