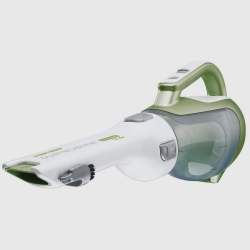 Black & Decker manufacture a host of Dust Buster handheld vacuums and the CHV1410L is the top model (at the time of this writing).  The CHV1410L is a highly rated Dust Buster on Amazon and owners like the machine's built in nozzle extension, quick recharge capability and long battery life.  However some folks report that the charger light is distractingly bright and others lament that the unit doesnt come with a wall mount.

There are a number of consumer ratings for the CHV1410L but they only come from 2 online sources as seen in the table below.  Ratings are quite good providing an overall average score of 88 out of a possible 100, or 4.4 stars out of 5.

The charge on the 14.4 volt lithium ion battery used in the CHV1410L has very limited fade and even if the vacuum just sits it will hold a charge for up to 18 months.  In addition this rechargeable battery will fully charge in about 4 hours which is about 5 times faster than the NiCd battery found in the CHV1410.  Bear in mind however that the machine has no low battery indicator so it is a good idea to keep it charged up all the time.

The Lithium Ion Dust Buster charger uses Smart Charge Technology which, according to Black & Decker, uses less energy and also helps to prolong battery life.  Black & Decker recommend that the battery not be left discharged as this diminished battery life.  They suggest always returning the machine to the charger after use.  The battery can be left in the charger indefinitely without harm.  On a full charge the CHV1410L will provide about 9 to 10 minutes of vacuuming.  Most owners seem satisfied with the vacuums quick recharge time and battery life.

The Black and Decker Lithium Ion Dust Buster has two filters - a Pre Filter and a Quick Clean Filter.  Both are washable and can be cleaned with soap and warm water. However Black and Decker still recommend that you replace the filters every 6-9 months depending on the frequency of use.

The dust canister has a capacity of 20.6 ounces and is a removable bowl that can be emptied and washed.  There is no indicator to tell you when emptying is necessary, however the dust canister is translucent so one can see when it is approaching full.

The CHV1410L generates suction via cyclonic action.  This approach spins air at very high speeds and throws the dust and debris out of the airpath and into the dust canister.  Cyclonic action helps the machine to maintain constant suction while vacuuming and also minimizes the dust that collects on the filters.  Specifications for this handheld indicate that it generates 23 air watts of suction.

The 14.4-Volt Lithium Ion Dust Buster weighs in at 4.8 lbs.  This is not the heaviest handheld we have investigated nor is it the lightest.  It is a little heavier than average however. Black and Decker warrant the CHV1410L for 2 years again defects in material or workmanship.