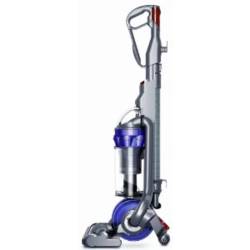 There are two DC25 models.  The DC25 All-Floors and the DC25 Animal.  It seems the only difference between the two (besides the color) is that the DC25 Animal comes with an extra tool called the mini turbine tool.  Does this make the DC25 Animal worth the extra money?

The mini turbine tool is an add-on that attaches to any Dyson vacuum cleaner and is designed to get into hard-to-reach areas and for better removal of dirt and pet hair.  How much does this tool cost?  Well, it varies but it is somewhere in the 70USD to 80USD range.  What is the difference between the cost of the DC25 All-floors and the DC25 Animal?  Well that is typically $30 - $70.  So, it seems if you need the turbine tool then getting the DC25 Animal is the better buy, right?  Well, not necessarily.  The issue here is that the mini turbine tool typically gets very average reviews.

The attachment is shown here on Amazon.  Out of 208 customer reviews the tool has a score of 3.5 out of 5 stars.  Not bad but not great.  Reviews on several other sites also indicate consumers are not overly thrilled with this attachment.   There seems to be a number of consumers indicating that the tool brush stops spinning if too much pressure is applied against a surface  rendering the tool rather ineffective.  As with many a product, however, it would only be fair to point out here that there are also a number of consumers that do like the tool and indicate that it works just fine.  But with ratings we find it is important to pay attention to the statistics, and low ratings - given a decent sample size - are worth paying attention to or are at least a sign that one should do a little more due diligence before making a purchase.

You may also want to view a video on the Dyson Ball technology to get an idea how the Dyson vacuum cleaner moves.

We have seen many a consumer struggle to get used to this rather unique form of locomotion.  Most really like it given time but some never quite get used to it.

The Dyson DC25 Animal has also been chosen in the past as one of our top picks for Best vacuum for Pet Hair - but not since 2017.

You might consider Dyson's latest upright the Dyson Ball Animal 2 (there is a review of the vacuum on this site).