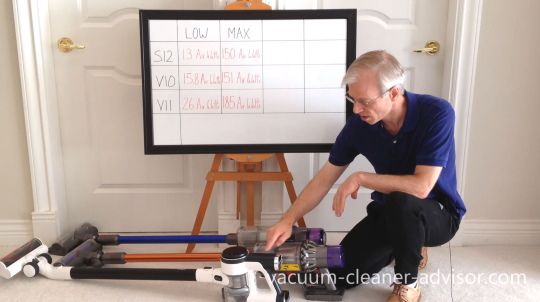 If you pay attention to the cordless vacuum landscape you will find it littered with stick vacuums that look similar to the popular Dyson stick vacs – the V6/V7/V8/V10/V11.  The overwhelming success of Dyson’s cordless machines has prompted manufacturers, both well-known and obscure, to create cordless units in an effort to capture a part of this lucrative market.  However, in our experience, many of these products just don’t have the build quality or cleaning capabilities you get with a Dyson.  Enter Tineco.
Tineco has created several cordless vacuums and their latest entry, the Pure One S12, is a fairly high-end machine.  This unit gives the Dyson vacuums a run for their money.
In this short article we are going to compare the S12 suction and battery run times to those of the Dyson V10 and the Dyson V11.  We have a full-blown Tineco Pure One S12 review which you may want to read if you are interested in more detail about this vacuum (we also compare the S12 to many other aspects of the V10 and V11 in the review).
Dyson V10
The V10 succeeded the Dyson V8 and provides longer run times and more power (in “Max” mode).  Three popular models are generally available - the Motorhead, the Animal, and the Absolute.  They all share the same battery and have 3 power modes (Low, Medium, Max).  Run times and suction power are the same across the models.
Dyson V11
The V11 was released in 2018 and was the successor to the V10.  The V11’s are the heaviest Dyson cordless stick vacuum to date, in no small part due to the extra large battery.  As a result of this battery the V11’s pump out more suction and longer run times than all previous Dyson cordless units.  There are currently 3 popular V11 models – the Animal, the Torque Drive, and the Absolute.  The V11, like the V10, has 3 power modes (Low, Medium, Max).
Tineco Pure One S12
The Pure One S12 comes in three popular models – the S12, the S12-Plus, and the S12M.   The S12M includes two 2000mAh batteries, while the S12 and S12-Plus come with two 2500mAh batteries (and thus have more power).  In this comparison we will focus on the S12/S12-Plus.  The S12s do not have fixed power modes like the Dysons, but rather have a power slider which allows you to set the suction to anything between Low (bottom of the slider) and Max (top of the slider).
RUN TIME COMPARISON
We tested the run times of the vacuums against one another.  Each vacuum was charged fully and run on low pile carpet with the following cleaner heads:
V10 – Torque Drive Cleaner Head
V11 – High Torque Cleaner Head
S12 – Direct Drive LED Multi-Tasker Power Brush
The triggers were held down (the S12 has a trigger lock, the Dysons do not and were taped down) and a stopwatch recorded the run time until the vacuums stopped.  The resulting run times are provided in the table below:
The Dyson vacuums come with one battery that cannot be swapped out, while the S12 includes two swappable batteries.  The two columns on the right of the table indicate S12 run times when using two batteries (essentially 2x the run time for one battery).
The tests showed that the longest running vacuum in Low power mode is the V11 at 55 minutes and 14 seconds, while the longest running vacuum in Max power mode is the S12 (when using two batteries) at 17 minutes and 54 seconds. Surprisingly, with one battery the S12 outperformed the V10 in Max power mode.
SUCTION POWER COMPARISON
Run time goes hand-in-hand with suction power - too much of one without the other is a problem.  So to get the big picture you have to consider both of these specifications for a cordless vacuum.  In the table below we provide the manufacturer’s suction power figures for each of the three vacuum cleaners.
As the table shows, the weakest suction is generated by the S12 at its Lowest power setting (13 Air Watts), while the most powerful machine is the V11 in Max mode (185 Air Watts).
However, we would caution equating cleaning capability with only suction.  Cleaning tests we’ve done in the past (for many vacums) show that there are several factors that aid effective cleaning besides suction – such as the configuration of the cleaner head and the brushroll.  Some lower suction machines can actually do a better cleaning job than some higher suction machines.  Of course, other criteria such as the type of debris and surface being cleaned can also affect these kinds of tests.
In the following short video clip we discuss the run times and suction output of the Dyson V10, Dyson V11, and Tineco Pure One S12.
You may also want to see the following detailed reviews:
Tineco Pure One S12
Dyson V11
Dyson V10

Nigel Russco has been reviewing and testing vacuums for over 14 years. He is a professional engineer and uses his review platforms to help consumers determine which vacuum cleaners are the best for their cleaning needs. Follow Nigel on facebook or view his vacuum review videos on the Vacuum Cleaner Advisor YouTube Channel.