The following table provides the manufacturer’s reported run time figures in the different power modes.  Some of these have been found in Dyson literature while others are the result of discussions with the manufacturer.  These figures are what we call “official”.

OFFICIAL RUN TIMES (MINUTES)
There are different run times for motorized and non-motorized tools, however we are not showing the run times for non-motorized tools in the table - these have become difficult to find for the V11 and for the most part consumers want to know the run time when using the vacuum with a motorized cleaner head.  A non-motorized tool will use less power than a motorized tool and therefore typically (but not always) has a longer run time.  Examples of non-motorized tools are the crevice tool and the dusting brush.  Motorized tools include the cleaner heads (direct-drive/torque-drive/high-torque) and the mini-motorized tool.
Also, you may notice that there is no MED power mode for the V7 and V8 in the above table.  That's because they only have two power modes while the V10 and V11 have three (the V11 also has an automatic mode but you cannot measure run time as power varies – see V11 review to learn more).
The power switches on the V7, V8, and V10 can be seen in the image below.  You will notice there are only two settings for the V7 and V8, while the V10 has three. 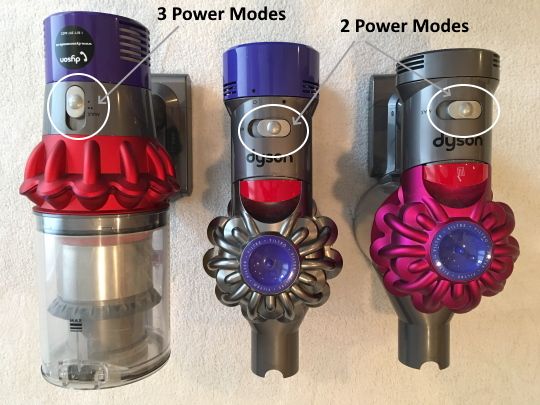 The power for the V11 is set within the LCD control panel which resides on the back of the handheld component.  We have taken pictures below of the three power modes in the control panel (ECO=LOW, BOOST=MAX).

We have all the different Dyson stick vacuums so we tested the run time for each and every one.  We ran each vacuum with its carpet cleaner head (direct-drive/torque-drive/high-torque – depending on the model) on low pile carpet.  Each battery was fully charged, the power trigger was depressed, and a stopwatch was used to measure how long the vacuum ran before it stopped.  We also ensured the filters were clean and the dust canisters were empty, so each machine was starting from the same baseline.  We did not do the tests with non-motorized tools.  All the details have been recorded in the table below.
TESTED  RUN TIMES (MINUTES)
One thing stands out to us in the table above.  All except one test provided a better run time than that claimed by the manufacturer.  That’s quite respectable.  The only unit that had any shortcoming was the V11 in Low Power mode – it did not quite make the 60 minute mark as suggested by Dyson.  However, in our opinion, the V11 figures are still exceptional and it outperformed all the other units.
Note: The V10 Motorhead is a slightly different machine from the V10 Animal and the V10 Absolute.  It has a different cleaner head, a longer wand, a smaller dust canister, and it even weighs less. The figures in the above table are for the V10 Animal and the V10 Absolute.  Our tests for the V10 Motorhead show slightly shorter run times.
Another battery related consideration is recharge time.  The batteries for each series (V7, V8, V10, V11) have different specifications:
V7: 21.6 V / 16.2 A / 2100 mAh / 46 Wh
V8: 21.6 V /18.5 A / 2800 mAh / 65 Wh
V10:  25.2 V / 20.8 A / 2600 mAh / 66 Wh
V11:  25.2 V / 21.6 A / 3600 mAh / 91 Wh
The battery recharge time for the V7 is 3.5 hours, however when Dyson brought out the V8 it had a larger battery and recharge time jumped to 5 hours.  They brought this back down to 3.5 hours with the V10, and with the V11 it is about 4.5 hours (although some sources quote shorter V11 recharge times).  Recharge time can be important if you do lots of cleaning and sometimes have short periods between cleaning sessions.
You may also want to watch our short video (below) where we walk through the run times for the Dyson cordless vacuums.  We cover both the official and tested figures and even discuss recharge times.

Dyson measures suction in Air Watts. The following table provides suction figures for the V11. V10, V8 and V7.
SUCTION POWER (AIR WATTS)
The above suction power table is a helpful accompaniment to the run time table - you can now see what kind of suction power you get for the duration of the run time.  This is important.  A long run time is useless if the suction is poor.  Here we can see that the clear winner is the V11.  It has more power in all modes than the other vacuums, except the V8 in Low Power Mode.  However it has almost the same power in Low Power Mode as the V8 but it lasts twice as long.  In addition, the V11 lasts longer in Max Power Mode than all others while putting out substantially more power.  This is mostly the result of the larger V11 battery.
You can also see that Dyson is tuning these units for certain combinations of suction power and run time.  For example, even though the V10 has a much larger battery than the V7, it is putting out less power in Low Power Mode. They’ve tuned the V10 such that in Low Power Mode it is more focused on longer run times (and thus less suction).  Is this the result of some kind of optimization whereby they’ve found a way to get quality cleaning at the lower suction and are therefore able to save power and provide longer run times?  Or is this perhaps simply a move so that they can make marketing claims – such as “more than 40 minutes of run time”.  We’re not sure but looking at both suction power and run time tables for these cordless vacuums generally helps to narrow down the best vacuum for your cleaning/timing needs.  Looking at one table in the absence of the other does not give you the full picture and can be misleading.
You may want to check out our short video on Dyson cordless vacuum suction power (below):
You may also want to read some of our detailed reviews:
Dyson V11 Review
Dyson V10 Review
Dyson V8 Review
Dyson V7 Review