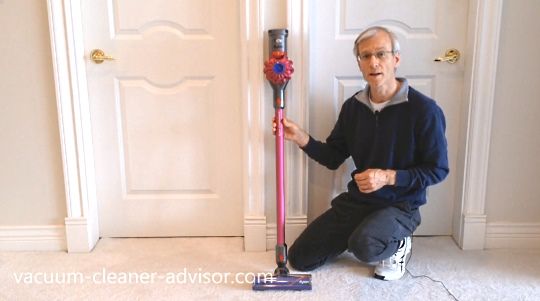 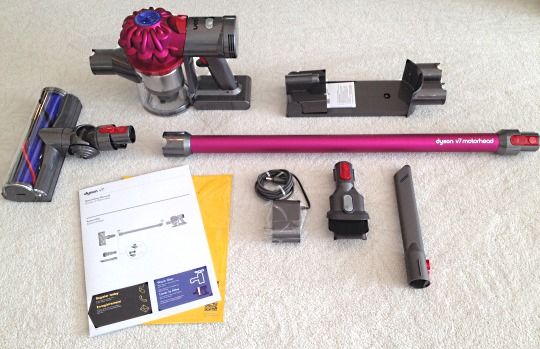 PROS
1) Lightweight.  One of the first things we love about this vacuum is that it is lightweight.  At 5.45 lbs the V7 Motorhead is lighter than most of the cordless vacuums on the market today, including those from competing brands such as Hoover, Shark, Bissell, Electrolux, etc.  The Absolute and Animal models are even lighter at 5.3 lbs.
2) Maneuverable.  Part of the maneuverability of this machine is the result of the low weight, but it is also due to how well the weight is distributed, and the swivel steering.  The bulk of the weight of the V7 is concentrated in the handheld unit (much of it below the wrist – not in front of the wrist) so movement at the end of the wand is easier.  Also, the cleaner head pivots with a twist of a wrist so steering the vacuum is a snap.
3) Versatile.  This is a stick vacuum but you can add lightweight non-motorized tools to the end of the wand to do overhead cleaning (will reach most ceilings with wand).  You can also remove the wand and you have a handheld vacuum which is great for typical handheld pick-up jobs and even vehicle interiors.
4) Reasonable recharge time.  The V7 recharge time of 3.5 hours is better than that of the V8 which is 5 hours.  Note that the V6 and V10 also have a 3.5 hours recharge time.
5) Powerful Max Mode.  The V7 generates 100 Air Watts of suction in Max Mode and this allows it to do a very effective cleaning job.  This is the same power output in Max Mode as the V6.
6) Large dust canister.  The dust canister on the V7 has a volume of 0.14 gallons and is larger than that on the V6 which is 0.11 gallons.  The larger canister is a nice feature as it does not have to be emptied as frequently.  The V7 dust canister has the same capacity as the V8 dust canister.  The V10 Absolute and V10 Animal actually have an even larger dust canister at 0.20 gallons but in all honesty they feel like they might be a bit large.  0.14 gallons may be the sweet spot.
7) Hygienic dirt ejector.  The V7, V8 and V10 all have a Hygienic Dirt Ejector system which allows you to empty the canister more effectively.  This system removes most of the stuck in/on debris so there is less need to stick your hand into the canister to pull out remaining dirt/dust/hair.
8) Quiet.  The V7 is quieter than the V6.  The extent to which it is quieter is very noticeable when using the two machines.
9) Reasonable price point.  The V7 is generally not as expensive as the V8 or the V10 and we’ve seen both the Motorhead and the Animal for under $300.  You can see Dyson V7 Motorhead pricing on Amazon.
Following is a video in which we walk you through some of the things we really like about the Dyson V7:
CONS
1) Less suction in Low Power Mode.  The V7 has the same battery specifications as the V6 but the suction at the cleaner head is less than the V6.  This is because Dyson decided to increase the run time of the V7 in Low Power mode – but this came at the expense of suction.  In Low Power Mode the V6 generates 28 Air Watts of suction while the V7 only generates 21 Air Watts of suction – a full 25% less.  You may find the following table of official figures interesting.
2) No soft roller cleaner head with Motorhead or Animal. The soft roller cleaner head only comes with the Absolute (although it can be bought separately and will fit on the Motorhead and the Animal).   The soft roller cleaner head is designed for bare floors and it does a much better job on this surface than the direct drive cleaner head.
3) Vacuum weight is up from the V6.  While the V7 is still ultimately a lightweight stick vacuum, it is a bit heavier than its predecessor the V6.  The V6 weighs 5.1 lbs while the V7 weighs between 5.3 and 5.45 lbs (depending on the model).
4) Short run time in Max Mode.  Like all Dyson stick vacs (V6, V7, V8, V10) – the run time in Max Mode is short.  The V7 has a run time of about 6 minutes in Max Mode and many owners report that this is simply not long enough.
5) Must keep trigger depressed for power.  Dyson refers to the trigger on the vacuum as a “run time enhancing trigger”.  The vacuum power is only ON when the trigger is depressed.  When you release the trigger the power turns OFF.  Quite a few people report that their fingers get tired and wish there was a means to turn the vacuum ON and have it stay ON.  We do not find this much of an issue but clearly some folks do.  All Dyson stick vacs at this time have the run time enhancing trigger.
6) Will not deep clean like a full size vacuum.  This is pretty much the same for almost all cordless machines.  These units typically just don’t have the power to do deep cleaning.  You can get deeper cleaning by putting the vacuum on Max Mode but then your run time is very short.
7) Edge cleaning is average.  The V7 will not edge clean like a good full size unit.  We tested the V7 using some chili flakes up against our baseboards and the edge cleaning was not particularly good (can see this test in the video below).  We noticed all Dyson stick vacs are about the same at this.

Following is a video in which we walk you through some of the things we don’t like about the Dyson V7:
Joomla SEF URLs by Artio