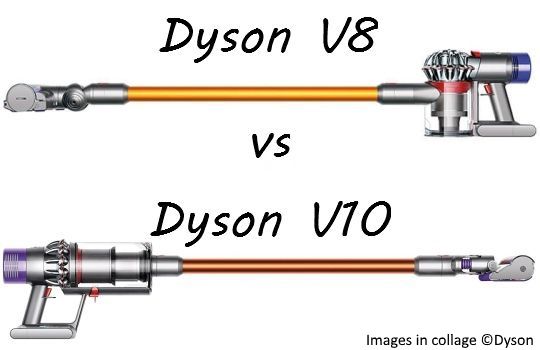 With the release of the Dyson Cyclone V10 cordless stick vacuum many consumers are pondering whether or not to buy its predecessor the V8 or to try the new kid on the block, the V10.  In this article we analyze, discuss and test both vacuums in order to answer that question. 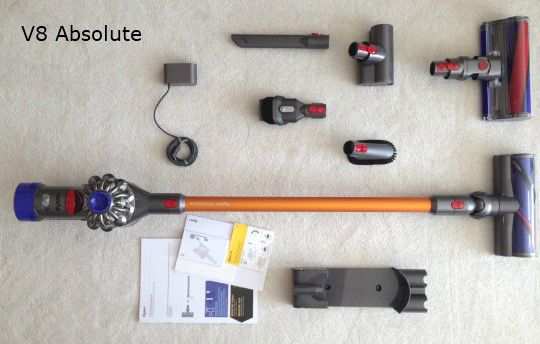 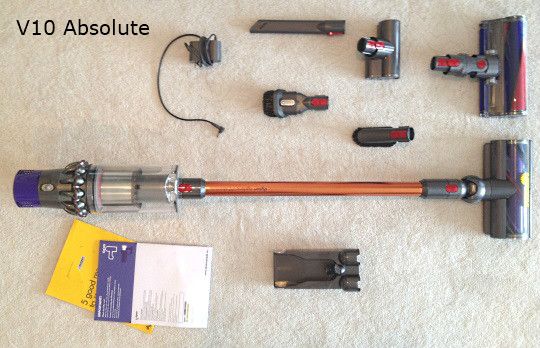 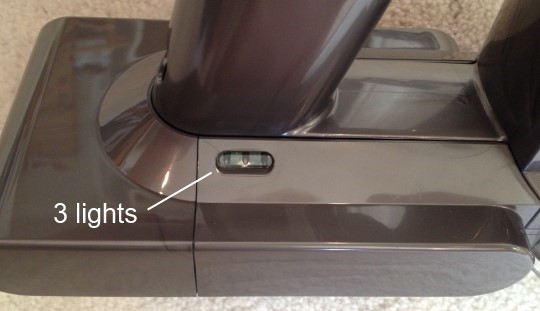 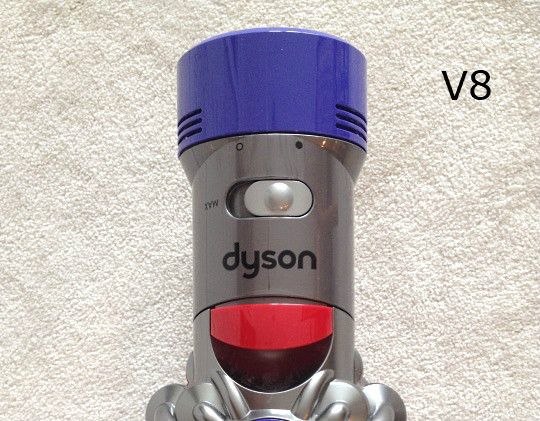 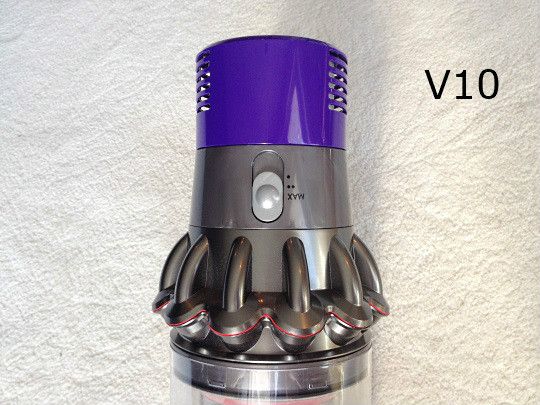 The following table shows the published (or "official") suction power figures for the V8 and the V10 in the different power modes.
SUCTION POWER

We have both the Dyson V8 Absolute and the Dyson V10 Absolute so we were able to run the vacuums in each power mode, and using a stopwatch we recorded the time it took before the vacuums stopped.  Before starting each run we ensured the battery was fully charged, the dust canister was empty, and the filters were clean.  We ran the vacuums with the direct/torque drive cleaner heads.  We found the following:
TESTED BATTERY LIFE
When looking at the battery life test figures a few numbers stood out - the battery life of the V10 in Low Power mode and the battery life of the V10 in Maximum Power mode.  They were both substantially longer than the official figures.
We were also impressed that the battery life test figures for each and every scenario exceeded the official figures.  It's nice to see a company not overestimating their vacuum's battery life.  That being said, we were not able to test the suction during the battery life tests to ensure it was as high as published or if it was maintained over the entire timeframe.  Suction figures are difficult to test and to compare.

Both the V8 and the V10 have HEPA level filtration with a Sealed System.  The sealed system ensures that air does not leak out around poor seals or cracks in the vacuum prior to passing through the filters and being exhausted.  In short, it makes sure the air entering the vacuum is properly filtered before being released back into the room.  The filters are also good for the lifetime of the vacuum cleaner and are rinsable.

We used a noise level meter that measures peak decibels and tested both the V8 and V10 in the different power modes.  We measured the noise at a distance of 3 feet from the front of the cleaner head with the vacuum in the upright position.
We were a little surprised that the V10 was louder than the V8 under all circumstances, especially in Low Power mode where it is producing less suction than the V8.  However other tests we have done show that in Low Power mode the V10 is, at least, quieter than both the V6 and V7.

We measured out the following amounts.

This debris was placed on a white, low-pile carpet in a line 5 1/2 ft long.  The vacuums were run over this line in a 10 second pass (approximately).

Bare floor testing was done on tile and used the same kind of debris as the carpet test above.  The big difference was that we switched over to the soft roller cleaner head as it is much more effective on smooth flooring.  The debris set down was the following:

We found the following:
The data above tells us that both vacuums perform very well on bare floors and that there is virtually no difference between the two units.  We did not feel the need to test other power modes as performance on the lowest power mode was already exemplary.

The V10's weighs more than the V8's with the exception of the V10 Motorhead which is actually the lightest of all the units.

Both vacuum series (V8 and V10) have a 2-year parts and labor warranty.

Costs are always difficult to nail down as they vary from retail outlet to retail outlet and they also tend to drop over time.  Nevertheless we have attempted to create a table of approximate costs at this time.

IF YOU HAVE ONLY CARPET
Consider the V8 Animal or the V10 Motorhead.  Cleaning on carpet it similar (when V8 on Low Power and V10 on Medium Power).  However, unlike the V10 Motorhead, the V8 Animal will include the mini motorized tool which is good for removing pet hair and ground-in dirt from upholstery, car seats and tight/cramped spaces.  Also, in Low Power mode the V8 should last for 25+ minutes while the V10 in Medium Power mode only lasts about 20 minutes.  In addition, you should be able to find the V8 Animal for less than the V10 Motorhead.  You can see Dyson V8 Prices on Amazon.
IF YOU HAVE CARPET & BARE FLOORS OR ENTIRELY BARE FLOORS
If you have bare surfaces to clean you will want an “Absolute” model so you get the soft roller cleaner head.  So your choices here are the V8 Absolute or the V10 Absolute.  The V8 Absolute cleans pretty much as well as the V10 Absolute on bare floors and costs less.  However, on bare flooring the V10 in Low Power mode will give you 35+ minutes of run time which is longer than the V8 in Low Power mode which is 25+ minutes.  Also, the V10 will recharge faster than the V8 (3.5 hrs vs 5.0 hrs).  You have to look at these trade-offs carefully and your decision will depend on your cleaning needs and budget.  You can see Dyson V8 Prices on Amazon or you may wish to see V10 Prices on Amazon,
IF YOU WILL USE THE HANDHELD UNIT A LOT
If you intend to do lots of work with the handheld component of the vacuum, we found that the handheld units of the V10 Absolute and V10 Animal were a bit large and bulky when compare to the V8’s.  We like the V8 for handheld work.  You can see Dyson V8 Prices on Amazon.
IF YOU REALLY NEED AS MUCH POWER AS POSSIBLE
If you must have the most power possible then the V10 is your vacuum.  In Max mode it "mops the floor" with the other Dyson stick vacuums (31% more power than the V8 and 51% more power than the V6 & V7).  However suction at this level is very short lived (6+ minutes).  You can see V10 Prices on Amazon.
You may also wish to read our article on the Dyson V7 vs V8 or our very detailed Dyson stick vacuum reviews:
Dyson V10 review
Dyson V8 review
Dyson V7 review
Dyson V6 review
You can also check out our detailed video in which we highlight the differences between the Dyson V8 and the Dyson V10.
Joomla SEF URLs by Artio