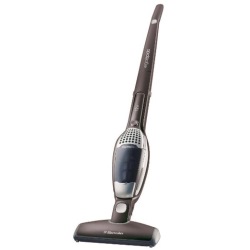 The EL1012A stick vac got fairly good reviews when it first came out.  Ratings have slipped a little over time however.  The machine's full name is the Electrolux EL1012A Stick Hand Vac 2 N 1 Ergorapido Cordless - we sometimes wish vacuum cleaner manufacturers would find a way to make less complicated names.  Consumer ratings for the vacuum are average.  Suction power is good and the built in handheld is a nice feature but the lengthy recharge time is an issue for some owners.

Lets cut to the chase.  A review of consumer comments from several quality sources on the net reveals the following general likes and dislikes:

With respect to actual consumer ratings, the Electrolux Ergorapido gets average scores.  (A better rated stick vac is the Hoover Linx Cordless Stick.)

The Electrolux EL1012A 12V 2-IN-1 Stick Vacuum Cleaner has two power settings.  The highest setting is for maximum quick cleaning while the lower setting is quieter and also maintains a longer battery charge.  It also has a motorized brushbar.  The Ergorapido is bagless and the dust cup is very easy to empty - it can be removed and emptied or you can flip open the front cover and tip the dust out.  This unit also comes with a Washable Premotor Filter.

The charging station can either rest on the floor or be wall mounted.  Consumers indicate that a full charge takes about 16 hours and that while vacuuming the charge will last for 15 minutes or so  there is some grumbling about this limited timeframe (although in our experience most stick vacs dont hold a charge for very long and they are indeed meant for quick cleanups and not house-wide vacuuming).  The recharging time seems a little slow however.

The other very handy feature on this machine is the Built in Hand Vacuum.  The bottom of the unit is removed (with the touch of a button) and it becomes a hand-vac.  It reportedly works well and is a feature that a number of folks appear to like (it is handy for cleaning cars).  The Ergorapido also comes with a built-in crevice tool for vacuuming in hard to reach areas.

As mentioned in the pros and cons above, many people like this stick vac because it is light.   It weighs in at a light 5.5 pounds and the dimensions are 10.5"L x 5"W x 43"H.  The Electrolux Ergorapido comes with a 2-year Limited Manufacturer's Warranty.

Electrolux have released a newer ErgoRapido, the EL1014A.  This machine is very similar to the EL1012A but it comes with a 9.6 volt battery as opposed to the 12 volt battery provided with the EL1012A.  This appears to be the only difference.

Both models seem to get about the same consumer ratings despite the less powerful battery in the EL1014A.  Although short battery life and a long battery recharge time continue to be an issue for owners of both units.  Also the batteries are apparently not interchangeable from one model to another (so you can't put a EL1012A 12V battery in your EL1014A).

On a more fun note readers may be interested that the world's most expensive vacuum is an Ergorapido.

UPDATE (Feb, 2013)
Our recent experience with a similar model as well as some "less than satisfied" owner reviews below has led us to do an update on consumer ratings to see how things are holding up for the Ergorapido. We found that ratings have dropped somewhat for the 1012A. The average score is now 78/100.  Please see updated table below:

Vacuum Video
You may also want to check out our video on the Ergorapdio 1011A below:

0 # Ms Robin 2012-11-14 12:01
I bought this vacuum based on reviews, and so I am here to say that my expereince was that it worked great at first and now it does not work at all, and something happened to the container that it spills everything out inside the machine. I took good care of it, and never dropped it or anything,it does not hold any charge,and it wasn\'t great to begin with. I\'ve had it close to a year and did use it several times a week when it worked. I don\'t recommend this.
Reply | Reply with quote | Quote
0 # Marg 2012-01-27 10:09
Have an older model I purchased about four years ago. The \"stick\" part quit working (hand held still worked) after just shy of two years, but still under warrantee so had it fixed. Now the \"stick\" has quit again and not worth repairing since out of warrantee -- again the hand held is fine. I\'ll look for a different brand to replace it.
Reply | Reply with quote | Quote
0 # Christine 2010-07-29 22:07
Love the vacuum BUT, would like a corded version. The charge that last only 15 minutes, is not practical. I really hope they make a corded version soon.
Reply | Reply with quote | Quote
Refresh comments list
Add comment
JComments
Reviews by brand
Reviews by type
Best Vacuums
Ratings Tables
In the Press
Amazon Affiliate