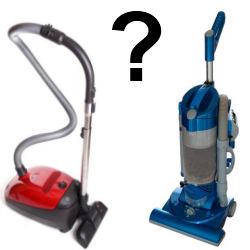 In this short article we take a look at the differences between the canister vacuum and the upright vacuum. Both configurations have been around for years and most people have one or the other  and sometimes both  at home. But if you are in the market for a new vacuum cleaner which style is the right one for you? There are advantages and disadvantages to each.  Even if you have a favorite brand, many manufacturers today make uprights as well as canisters.  Weve also included some information highlighting the pros and cons of stick vacs and handhelds.

Canister vs Upright
If you are looking for a vacuum cleaner to clean your house or large apartment, you are probably considering either an upright or a canister vacuum.  These are generally made for large area cleaning, but they are different in many respects. 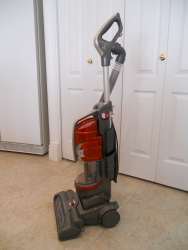 Uprights are slightly more popular than canister vacuums but canisters still sell very well.  Folks tend to prefer one configuration over another and this often comes down to what one is used to.

I suspect many of you grew up with one vacuum type or another in your household and you may have stuck with it  I did when I purchased my first vacuum (a canister).  But the best machine can also be dependent on the kind of cleaning and the needs of the vacuumer.  Considerations may include maneuverability, flooring, reach, etc.

Generally speaking, when comparing the two styles of vacuum the following is often (but not always) true:

Consider the above carefully before buying your next vacuum  it may help create a better cleaning experience.  It should be noted that manufacturers have attempted to overcome some of the shortcomings of each vacuum type with the addition of special features and tools.  Depending on the brand and model, this has had some level of success.

Stick vs Handheld
Stick vacuums and handheld vacuums are sufficiently different that there is less confusion with respect to the best machine for the job.  However there is some overlap and we see both units used to clean up small messes on bare floors and sometimes carpet.  Both are also generally cordless and bagless (but not all).

The stick vacuum can handle medium sized jobs and is only used to clean the floor while the handheld is only for smaller jobs and can be used on the floor, tabletops, counters, car interiors, etc.  The handheld is clearly more versatile but it is not the right machine when a significant area is involved.

Most stick vacs are capable on bare floors but only some are able to do a decent job on carpet (they need a brushbar that works well for this).  The stick vacuum is best suited for cleaning medium sized areas  smaller than a large apartment or house - and can be a handy alternative to bringing out the canister or upright.  They are usually cordless and lightweight so they are easy to lift and maneuver and you dont have to worry about finding an outlet. 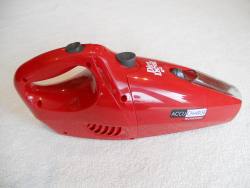 Handhelds rarely have a brushbar and are not made for any kind of medium or large area cleaning.  They are used on almost all surfaces however  for quick pickups of dry messes or spills.  You commonly find these in a workshop or a kitchen.

Some manufacturers have tried to bridge the gap between the handheld and the stick vac by adding separable handheld units to their stick vac  examples are the Electrolux Ergorapido and the Shark Navigator Freestyle.  This approach has worked rather well and if you require both a stick and handheld these machines are fairly effective.

Stick vacuums and handheld vacuums often have the following differences:

>  What is the best vacuum for pet hair?

>  What is the best Shark Vacuum for pet hair?

>  How do you fix a vacuum cleaner?

>  What is the best cheap vacuum?

>  What is the best vacuum for hardwood floors?

>  Bagged vs bagless vacuums - which is best?

>  What is the best bagged vacuum?

>  What is the best bagless vacuum?

>  What is the difference between canister vacuums and uprights?

>  What is the best upright vacuum?

>  What is the best canister vacuum?

>  What is the best stick vacuum?

>  What is the best cordless vacuum?

>  What is HEPA filtration?

>  What is the best lightweight vacuum?

>  What is the best brand of vacuum?

-1 # Tim T. 2015-05-12 11:02
There are so many options to choose from. My entire house has tile floors. I think a cannister is the best option. What do you recommend under $300 ? Should I consider a reconditioned Miele that\'s under $200 ?
Reply | Reply with quote | Quote
Refresh comments list
Add comment
JComments
Reviews by brand
Reviews by type
Best Vacuums
Ratings Tables
In the Press
Search