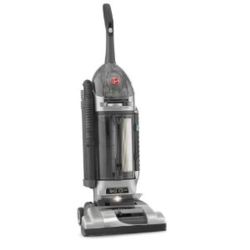 Hoover is a very well established brand.  So much so that the British often refer to a vacuum cleaner as a hoover.  The company manufacturers many electrical household items and has been around since the early 1900s.  They have recently released a series of vacuums coined anniversary.  This is to commemorate their 100th anniversary - and one of the popular anniversary vacuums is the Hoover U5786900 Windtunnel Anniversary Bagless Upright Vacuum Cleaner.

As described, this vacuum uses the Hoover patented Windtunnel Technology.  Hoover does not go into great detail about how the WindTunnel technology works other than to say their engineers went to great lengths to develop a system that lifts and traps dirt very efficiently (using three distinct air channels) without any scattering.

The Hoover U5786900 also uses a HEPA filter.  What is a HEPA filter?  HEPA stands for High Efficiency Particulate Air and is a filter that removes 99.97% of all airborne particulates of 0.3 microns or larger that pass through it.  There are actually higher grade filters such as ULPA which stands for Ultra-Low Penetration Air and is a filter that removes 99.99% of particles 0.12 microns or larger.  Although it is rare for a domestic vacuum cleaner to use level of filtration.  When considering a HEPA vacuum cleaner it is important that the unit passes ALL intake air through the HEPA filter prior to exhausting it  otherwise particulate matter is bypassing the filter and being introduced back into the surrounding environment.  HEPA filtration is particularly popular with allergy sufferers.  You can find Hoover HEPA filters in the Hoover Accessories section of our online shop.

The U5786900 is an upright vacuum cleaner.  Hoover makes both upright and canister models (not to mention a host of other specialized vacuums).   Historically the upright models have tended to be better at cleaning carpets while the canister vacuums have been better for hard surfaces and tend to be quieter  and they tend to be slightly more expensive.  However, it should be noted that the distinction between the two types of vacuum cleaners is becoming more blurred as manufacturers attempt to bridge the gap between strengths and weaknesses.

The Hoover U5786900 is bagless.  It has, instead of a disposable bag, a dirt cup that can be taken out of the machine, emptied and returned.  The dirt cup is Bottom-Empty which Hoover claim simplifies dirt disposal and reduces spill.  The vacuum also has something called an Embedded Dirtfinder which uses red and green lights to indicate areas which may need additional cleaning time.  When a dirty area has been sufficiently cleaned, the red light will turn green.  There is also the on-board toolkit which includes a pet hair tool, a 29 foot power cord, an 8 foot stretch hose, 5 position height adjustments, a headlight, and edge cleaning bristles.   The vacuum has a 3 year limited warranty

At the time this article was written there were very few reviews of this product to be found and those found were overwhelmingly positive.  As of January 2016 we have uprated the ratings and score for the U5786900 and like many vacuums, over time the ratings have dropped.  The latest ratings can be found in the table below.  The following pros and cons were also noted:

The size of the vacuum post-assembly is as follows:

There is also an Owners Manual at the Hoover Company site:
http://hoover.com/file/494/