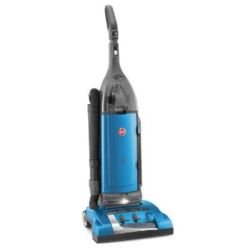 The Hoover U6485-900 Windtunnel Anniversary Vacuum Cleaner is a self-propelled, bagged upright with HEPA filtration.  Many consumers are sold on the self-propelling feature and also report that their purchase was based on the vacuum getting top-notch reviews by a leading Consumer Reports magazine.

Like many of the Hoovers the U6485-900 uses the patented WindTunnel technology that, according to Hoover engineers, is a system that lifts and traps dirt very efficiently (using three distinct air channels) without any scattering.  It also uses a 12 amp motor.  There is not much written about the technical nature of the self-propelled feature but consumers seem to like it and report that it makes moving the vacuum much, much easier both in forward and reverse.  This vacuum also has HEPA filtration.  HEPA stands for High Efficiency Particulate Air and is a filter that removes 99.97% of all airborne particulates of 0.3 microns or larger that pass through it.  HEPA filtration is particularly popular with allergy sufferers.

Other U6485-900 features include the embedded DirtFinder system that uses red and green lights to indicate whether areas are clean or need more cleaning attention.  When particularly dirty areas are encountered the red dirty light turns on and remains on until the area is clean (upon which the red lights turns off and the green light returns).  There is also a complete onboard toolkit with a pet-hair tool, non-marring wheels, a motorized brushroll with on/off controls built into the handle, a 31 foot power cord, 8 foot stretch hose, 5 position height adjustment, a headlight and a manufacturers 3-year warranty.  The dimensions of the Hoover U6485-900 are 13x15x43.

A review of consumer comments on many sites indicates the following general likes and dislikes regarding the Hoover U6485-900 Windtunnel Anniversary Self-Propelled Bagged Upright Vacuum Cleaner:

Many folks indicated that one should purchase the extra-long flexible hose for stairs as the onboard hose is short and lugging this rather heavy vacuum up stairs can be a chore.  Also, like many vacuums today, there is a fair bit of plastic construction that leaves consumers wondering about longevity - we've seen this comment/concern with a lot of new vacuums however.  Many people also indicate that they purchase this vacuum due to an excellent report it received in Consumer Reports magazine.

Consumer ratings gleaned from several key sites on the web include the following:

As this Hoover is a bagged upright, it does not use a dirt-container like many of the bagless machines today, but instead uses a disposable bag. There is a long standing debate about bagged or bagless vacuum cleaners being better  bagged tend to make it easier to dispose of the collected dirt and it is cleaner to throw away the bag and put a new one in.  Bagless do not require purchasing and throwing away bags but it should be noted that they often have filters that need to be maintained or replaced and they rely on seals to prevent the dirt-container from leaking.

It should be noted that upright vacuum cleaners have a few pros and cons when compared to canister type vacuums.  Upright vacuums often have larger vacuum cleaner bags than canister vacuums. With an upright you are also not lugging the vacuum behind you and they do tend to be better/easier when vacuuming large carpeted areas and hallways. However they often prove difficult when vacuuming stairs and with their upright profile it can be difficult getting under furniture.

0 # Pamela 2013-03-01 18:11
Just bought this model because of the power drive. I was told it is the only one on the market with this feature and that Hoover is thinking about not making it. I sure hope not. Glad a got mine. I don\'t have stairs in my house so it is just perfect. Does a great job.
Reply | Reply with quote | Quote
Refresh comments list
Add comment
JComments
Reviews by brand
Reviews by type
Best Vacuums
Ratings Tables
In the Press
Amazon Affiliate