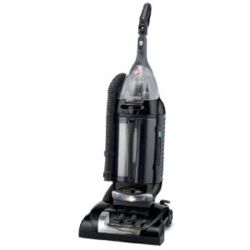 The Hoover UH60010 is a self-propelled bagless upright that gets relatively good consumer ratings but not stellar.  It comes with a large number of features including a handheld pet hair tool, but the warranty on this machine is short at only 1 year.

A review of several quality sites indicated the following consumer ratings for the Hoover UH60010:

Features
The UH60010 is another in a long line of Hoover Windtunnel vacuums.  Hoover has a tremendous range of upright vacuums.  At the time of this writing there are no less than 43 different upright models on the Hoover website.  The Windtunnel technology is always vaguely described but it is essentially a system that uses 3 distinct air channels to lift and trap dirt and debris very efficiently while limiting any scattering.  The UH60010 is powered by a 12 amp motor.

This Hoover is bagless.  Whether or not this is a good thing depends on your preference.  There are pros and cons to both bagged and bagless machines.  With a bagless you do not have to purchase (and dispose of) bags, however the dirt canister can sometimes be awkward to remove and reattach and they frequently are messy to empty.  It should be noted however that there are no consumer comments indicating issues with the UH60010 dirt canister (there are actually a few indicating that removing and emptying the canister is quite easy).

An Embedded DirtFinder System is also featured on this vacuum.  This system uses lights to indicate whether an area is clean or dirty.  The system displays a green light when vacuuming normally, however when a particularly dirty area is encountered the light turns red and will stay red until the area is vacuumed clean.

The brushbar on the Hoover UH60010 is motorized (as opposed to being driven by air) and the brushbar has a switch allowing it to be turned on and off.  Being able to turn the brushbar on and off is important if you wish to use the vacuum on delicate rugs or certain hard flooring.  These can be marred by an aggressive brushbar.   There are also several different heights to which the vacuum can be adjusted and this helps when transitioning between different floor surfaces.

The UH60010 comes with a flexible hose and a number of tools including 2 extension wands, a dusting brush, an upholstery tool, a crevice tool and a handheld powered pet hair tool.  As the name states, the vacuum is also self-propelled.  This feature operates in both forward and reverse for easy maneuverability.

Additional features include HEPA filtration (which helps remove allergens from the air and is useful for those suffering from asthma or allergies), a headlight (a nice feature once you get used to it), edge cleaning ability, a fairly wide 15-inch cleaning path and a 28.5 foot power cord.

The Hoover UH60010 weighs a rather hefty 25 lbs.  The self propelled feature is clearly there to alleviate the weight issue and according to consumers it does a great job in helping move the vacuum over the floor, however it doesnt do much if you have to lug the vacuum up or down stairs

The range of specifications listed on different sites for this vacuum cleaner is extensive.  Specs that appear to be in question include the, power cord length (27 to 31 feet), tools (several different sets listed), and weight (22 to 27 lbs).  Unfortunately we have not been able to get our hands on this particular machine so we have done as much research as possible to try and firm up the specs.  It should be noted that Hoover no longer list this model on their site and a manual is also difficult to find.