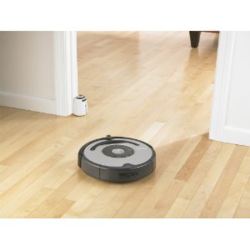 The iRobot Roomba 560 is the third generation of Roomba and is one of iRobots middle-of-the-road models.   iRobot indicates that there are many improvements over previous models.  Consumers seem to like the product but also indicate that, while it is a step forward, it still has some issues.

The iRobot 560 comes with 2 Virtual Wall Lighthouses.  These devices can be set to either virtual wall mode or lighthouse mode.   In virtual wall mode the unit sends out an infrared beam that the Roomba will not cross.  This mode is used to limit the Roomba to certain areas.  In lighthouse mode the unit confines the Roomba to a certain room until the room vacuuming is finished then sends the Roomba on to the next room.  This approach provides for room to room cleaning.

Other 560 features include an easy to empty dirt container (consumers have indicated that it is indeed easy to empty) and anti-tangle technology which can sense when the machine may be tangled and will run escape algorithms to try and free itself.  The Roomba 560 also detects when it is nearing and object and slows down to a speed in which the impact is a gentle bump, and it can detect and avoid a dropoff such as stairs.  Another feature is dirt detection that allows the unit to detect areas that are particularly dirty and spend more time vacuuming these areas.  The 560 has two cleaning modes - Clean mode for basic room cleaning and Spot mode for cleaning in a localized area (within a three foot diameter).  The iRobot Roomba 560 dimensions are 16.8 x 21 x 5 inches and it weighs 8 pounds.  It also comes with a one-year manufacturers warranty.

When one purchases an iRobot Roomba 560 the box contains the following:

With respect consumer ratings/reviews, the iRobot Roomba 560 scores above average  typically 70% or greater.  However, as we mentioned in our well-publicized article Are vacuums being built to fail? Helping consumers avoid the clunkers., it is important to consider the time the consumer has had the product before they post their reviews.  Dont be taken in by honeymoon reviews.  This seems to be particularly true for robotic vacuums.  Consumers are thrilled at first, then several months later when the machine develops problems, their opinions often drop.  Robotic vacs are quite fascinating so this may explain some of the initial exuberance.  Having said that there are still quite a few comments from folks that have had a robotic vacuum for months and simply love it (reviews from folks who have had a robotic vacuum for a year or more are reasonably rare).  A snapshot of consumer ratings at several quality sites can be seen in the table below:

Common consumer likes and dislikes related to the iRobot Roomba 560 are provided below:

CONS
- Dirt container fills quickly and no full notification.
- Requires frequent cleaning of filters, brushes, sensors
- Side brushes sometimes break (a common problem that consumers really do not like)
- Auto-docking is very hit and miss
- You must prepare the area (remove throw rugs, cords, etc.) typically before use (same for most robotic vacs)
- Lighthouse feature doesnt work that well (often ignored by bot)

An iRobot 560 video showing vacuum features is provided here - it does contain a URL for some outlet in lichtenstein of all places but the video itself is quite good (it is official iRobot marketing material I believe).

0 # Jeff Rosen 2012-08-13 10:45
I have owned 2 Roomba models over the last 7 years. Mixed reviews on the first two, because of the warranty and lack of after-warranty service. They first two lasted just under a year, then died. Each was replaced under warranty. When the warranty replacement on the second lasted only a month..... no dice... warranty is done, so is the warranty... no appeal, no reconsideration. They are firm about it.

I learned that this is a throwaway device, and as such, must be bought from a store that takes items back forever, no matter. I do not know if stores can be mentioned here, but BB and Beyond as well as COSTCO offer such a warranty.

Well the one I got at Costco laster 15 months, then died. Store refunded, I went back to aisle, grabbed another... that one is now about 1.5 years old... still perfect.

Last month I bought another for my business place.

What many people use as a basis for how well a vac cleans does not apply to robotic vacs.

1. They do not use a lot of suction to clean. They clean primarily from the beater bar brushes and overcome the lack of shear suction by covering every area from multiple angles.

2. The current production Roomba models DO warn of the need to empty the collection bin, or to clean the brushes, recharge, take to the park.... there are multiple tones then a voice telling you what it needs.

3. Cleaning the Roomba. YES, it does need to be cleaned. I find it BEST to have a smaller sized shop vac in the house, and use it when removing the collection bin and rollers for cleaning. This is not difficult, is fast, and does not offset the benefit of the Roomba.

Even if one had the best vacuum in the world, it does not good if not being used. I hate to vac. I set the thing in one bedroom, shut the door, and let it go.... I come back in, room is done, and Roomba is choked full of debris.

You can not even make this thing fall down a set of stairs. I wish we could take this sensor technology and put it in our elderly population. It would save lives.

How clean is the area under a bed, under store fixtures ( I have one running every 2-3 mornings at work, and it is not loud enough to interrupt phone calls ). There are many other places a normal vacuum will not reach.

The Roomba works great on carpet, but also good on solid surfaces.

One note.... if you have pricey furniture, you might not like the little dings you will get on furniture legs.

I would love if Roomba would improve to a touchless sensor technology, so it can avoid obstructions BEFORE making contact with them.


Reply | Reply with quote | Quote
0 # John Barnard 2010-12-19 04:47
I Have the Roomba 570 Model, Works Great, Only One Issue and Thats the Gearbox, Once They Perfect That Problem They Will Be a Great Dependable Machine!
Reply | Reply with quote | Quote
Refresh comments list
Add comment
JComments
Reviews by brand
Reviews by type
Best Vacuums
Ratings Tables
In the Press
Amazon Affiliate