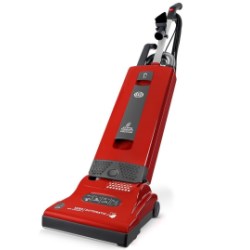 The Sebo X4 is a bagged upright vacuum cleaner designed and manufactured in Germany.  It has hospital-grade filtration and is approved by the British Allergy Foundation. It is well-built and reliable but expensive.  The X4 is noted for being powerful, capable on both carpet and bare floors and excellent at pulling up pet hair.  It is a tad on the heavy side however and the machine, while highly effective, looks a bit dated.

If you are not familiar with Sebo vacuum cleaners it may be helpful to view the short video below to get an idea what this group represents.

Consumer Ratings
We found 120 consumer ratings for the X4 on several popular online retail websites.  When these ratings are averaged they generate a score of 82.8 out of 100 (about 4.1 stars out of 5).  This is a slightly above average score.  You can compare the X4 score to the scores of other uprights in our upright vacuum ratings table if you wish.

Consumer Insights
A review of owner comments has provided the following insights into common X4 likes and dislikes:

Owners report that it is effective on smooth flooring as well as carpet and that it is also very good at vacuuming up pet hair.  There is also consensus that the X4 is very powerful and this, in part, helps with its high level of cleaning performance.  Unfortunately most owners also feel this is an expensive vacuum cleaner, but that doesnt mean they don't feel it's worth the money.  On the contrary  most owners feel the X4 is a good buy despite the hefty price tag.

Oddly there are many comments about how heavy the vacuum is and also quite a few comments about how light and easy to move it is.  This is likely a function of what each individual consumer is used-to or what they expect.  At just under 17 lbs we feel the X4 is slightly on the heavy side (but not as heavy as a Miele upright for example).  Despite the weight, folks report that the vacuum is surprisingly maneuverable and that it tends to pull itself along the floor when you are vacuuming.

There are some reports that vacuum parts can be a bit pricey.  Given that the Sebo is manufactured in Germany this is not surprising.  However the X4 is known for its reliability and durability so the need to buy parts is generally limited.  Also the vacuum bags are fairly large and owners report that they last a long time before needing to be replaced.

On Amazon we found 10 bags for under $20 so the bags are also not too expensive.  You can see options for buying Sebo filter bags on Amazon

Owners also comment favorably upon the fact that the vacuum has HEPA level filtration and that it removes most allergens from the air.  In addition, folks have found that the machine will shut itself off if a blockage occurs.  This feature is designed to save the belt and the vacuum motor and it can be a lifesaver  replacing motors and belts is a major hassle and can be very expensive.

Features and Specifications
Sebo vacuum cleaners are designed and manufactured in Germany.  They are well-made and capable machines but they are not cheap.  The X4 will set you back somewhere between $850 and $950.

Sebo often highlight in their marketing materials that their vacuums last for 10-15 years or more and that during this timeframe one could go through several cheaper machines.  They are probably right and some owners feel that buying a Sebo can actually be cheaper in the long run.   Sebo longevity is, in part, the result of using commercial grade components in the vacuums. Manufacturing materials include steel axles and bearings, metal parts, reinforced ABS plastic, and a quality motor (1300 watts with 2 fans).

The motor itself is rated for 800 hours of use and the air is filtered before it hits the fans of the motor.  This design ensures the fans are not subject to dust and debris from the air path.  It is a design that is well-known for producing better suction at the nozzle head and at the end of the hose or wand

This is a bagged machine and it has an effective filtration system.  There are actually 3 levels of filtration: 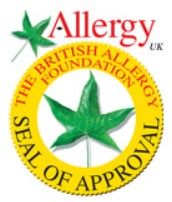 The result of the 3 levels is S-class filtration which is a European standard very similar to HEPA filtration.  However Sebo achieve this without actually using a HEPA filter.  The Sebo X4 is approved by the British Allergy Foundation.  The X4 also has a sealed system, and this ensures that all the air entering the vacuum is passed through the filters before being exhausted from the vacuum.  This is an important feature if you want truly effective filtration.  You can learn more about HEPA filtration and sealed systems in our article on HEPA filtration.

Sebo vacuum bags have three layers and these form part of the vacuums exceptional filtration system.  The bags also have a cap so you can seal in the dust/debris when removing them.  In addition they are fairly large and have a capacity of 1.4 gallons.  As mentioned previously owners find that the bags last a very long time.  The X4 has a bag change indicator which tells you when it is necessary to replace the bag.

Automatic height adjustment allows you to move from carpet to bare floors and back without having to manually make height adjustments.  It is also useful when moving between different pile carpet.  The brushroll itself has two rows of bristles for maximum cleaning capability.  The brushroll is very easy to access for maintenance (to clean or replace for example).  It can be removed without the aid of any tools at all.

The X4 is effective on all manner of flooring and according to Sebo it is... 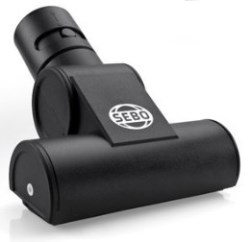 The crevice tool, dusting brush and upholstery tool all store on-board the vacuum which makes them easily accessible when needed.  The machine also comes with a 6 foot hose and a wand.  Tools can be fit to the end of the hose or the wand providing a reasonable cleaning reach.

The power cord on the X4 is 40 feet in length.  This is a very long power cord and it allows you to move from place to place without having to frequently plug/unplug the machine.  With power cord, hose and wand the vacuum has a cleaning reach of about 48 feet.  One can also purchase a separate 9 foot extension hose which can be attached to the existing hose.  Together these provide a 15 foot hose and this is helpful when cleaning long sets of stairs for example.  The extension hose is included with the EXTRA version of the vacuum. 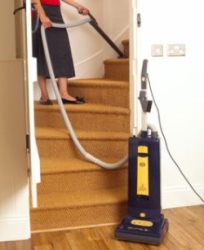 The X4 has a 12 inch wide nozzle with a cleaning path width of 10.5 inches.  This is actually a little narrow but it adds to the nozzle maneuverability.  The X5s have a much wider nozzle at 15 inches.  A bumper guard around the X4 nozzle ensures that walls and furniture do not get banged or scraped and rubber wheels on the bottom of the nozzle help protect flooring.

The body of the vacuum can recline a full 90 degrees (fully horizontal) adding to the cleaning flexibility of the machine.  This is accomplished by depressing a foot pedal at the back corner of the nozzle.  In the horizontal position the clearance of the vacuum is only 5.5 inches and this helps when cleaning under beds and low furniture.

The X4 can lay horizontal creating a low 5.5 inch clearance

There are a series of indicator lights on the front of the vacuum cleaner (see image below).  These include:
- Brush adjustment indicator lights
- Worn brush / brush obstruction light
- Bag full or Clog light

This is not a particularly lightweight upright but at 16.9 lbs it isnt too heavy either - just slightly heavier than average.  Carry handles on both the front and back of the machine make it easier to lift and move.  The vacuum is also rather quiet which is a nice feature and one several owners have commented favorably upon.

The unit also has a lifetime, non-slip cog belt. Cogs in the belt fit into slots in the motor pulley and the brushroll and this ensures no slippage.  With a lifetime belt there is no need to purchase new belts (and go through the hassle of changing them).  In addition, the X4 has one-sided edge cleaning which helps clean up tight against baseboards and furniture (the X5 has two-sided edge cleaning).  The vacuum does not have a headlight nor does it have variable suction controls.

The X4 is UL listed.  Underwriters' Laboratories (UL) is a nonprofit, independent product safety certification organization in the US.

The X4 carries the following warranty:
- 5 years on motor
- 3 years on non-wear parts
- 1 year on labor

Manual
You can find the Sebo X4 Automatic manual here.  It is quite detailed and describes the features and parts of the vacuum.  It also includes operating instructions and information on maintenance and troubleshooting.