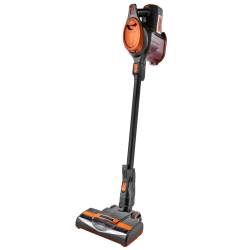 The Shark Rocket is a relatively new vacuum cleaner and is somewhere between a stick vac and an upright.  It is similar to the Dyson stick vacs, like the DC44, except the Dysons are smaller, lighter and cordless while the Rocket has a power cord. Dysons are also more expensive.  Consumer ratings are very good for the Rocket.  Owners like that the machine has strong suction, is fairly maneuverable, and is effective at dealing with pet hair.  But it is a bit top heavy and can be hard on the wrist.

Consumer Insights
We found the Rocket on several online retail sites several of which have owner ratings as shown in the table below.  When averaged these ratings provide a score of 91.9 out of 100 (or about 4.6 stars out of 5).  You may wish to check out our table of stick vacuum ratings for comparison purposes.  We often update vacuum scores and the table below was upated in February 2016.  It is interesting to note that generally when we update ratings, the score usually drops.  This is likely due to the aging of the vacuum and the fact that owners find more issues with the machine over time.  However, in the case of the Shark Rocket HV302 the score in 2014 was 84 and now - almost two years later - the score has jumped to 92.  This is not something we often see.

A review of consumer comments and input from several sources provides the following Rocket likes and dislikes:

The consumer score (91.9) for this stick vac indicates that most owners are pleased with their purchase.  However the score isnt perfect and there are some issues such as those highlighted in the Cons section above.  The most common complaint is the weight of the handheld portion of the vacuum.  Quite a few folks report a sore wrist or arm after vacuuming for long periods.  This has even resulted in some owners returning the unit.   In addition, there are a number of comments that the unit aggressively pulls itself forward when vacuuming and that it requires significant effort to pull it back (some dont find this to be an issue but others do).

On the positive side most consumers report that the Rocket has plenty of suction and that it provides good pickup.  There are a few filters to maintain but they are reportedly very easy to access and clean.  Also, many folks compare it to a Dyson stick vac while highlighting that it is much less expensive.   On our site we also found that both machines (Dyson stick vac and Shark Rocket) get similar consumer ratings.  For example the Dyson V6 Absolute scores 90/100 while the Shark Rocket scores 92/100. 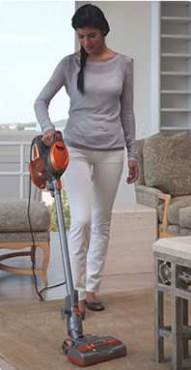 Operates as an upright

Features & Other Information
The Rocket is a 2-in-1 vacuum cleaner.  It operates like a stick vacuum and with the wand removed also as a handheld vacuum.  It uses cyclonic technology which involves rapidly spinning the air entering the vacuum such that the dust and debris are removed.  This approach is the common bagless technology we read so much about today.  It ensures no loss of suction (assuming you keep the filters clean) and you will see this frequently highlighted in the Shark Rocket marketing materials.  The Rocket is powered by a 4.2 amp motor.

The vacuum is relatively lightweight at just under 8 lbs but as mentioned by many a consumer the bulk of the weight is in the handheld portion of the unit.  Some consumers feel this weight distribution makes the vacuum hard to hold for long periods of time and that it tires the wrist and arm.  This is a common complaint but it is only fair to point out that not all owners feel this is a problem.  It is likely a function of the strength of ones wrist/arm.  The Dyson DC44 by comparison weighs about 5 lbs and even this machine gets complaints about being top heavy and hard on the wrist. 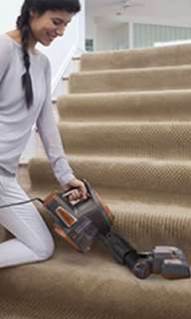 Operates as a handheld

One of the key differences between this and the Dyson stick vacuums is that the Rocket is corded.  This has its pros and cons.  A corded machine does not lose power over time as you vacuum but there is a level of convenience compromised.  Corded vacuums can only work within the radius of their reach as defined by the length of the power cord.  Also, as you move from room to room you have to plug and unplug the machine  depending somewhat on the length of the cord.  While the cordless vacuum does not have these inconveniences the drawdown of power can leave some owners frustrated.  These vacuums usually generate strong cleaning power for 15 to 20 minutes maximum and sometimes less.  If you have cleaning jobs that last longer than this you will be out of luck.  Also, recharge times take several hours (5 to 6 hours is considered fast).

Many Shark vacuums are directly compared (By Shark) to Dyson vacuums and the Rocket is no exception.  Shark maintains that independent tests have determined the Rocket deep cleans carpet better than a Dyson DC40.  The DC40 is a full size upright by the way.  The testing was for Carpet Embedded Dirt Removal Effectiveness.  We cant speak to the accuracy of these tests or the particular details of the tests so we simply take this with a grain of salt.

There are several versions of the Shark Rocket but they are all very similar (we are addressing the HV302 in this article).  The HV302 has a power cord that is 25 feet in length.  Some of the other Shark Rockets have different power cord lengths.

The Rocket is designed to clean both carpet and bare floors.  The power switch on top of the vacuum (seen in image below) turns the vacuum on and also offers two brushroll speeds; "Gentle" (setting I) for bare floors and area rugs and "Deep Cleaning" (setting II) for carpet.  These settings determine the speed at which the machines motorized brushbar rotates.  The Deep Cleaning setting results in the brushbar spinning very quickly while the Gentle setting slows the brushbar significantly. 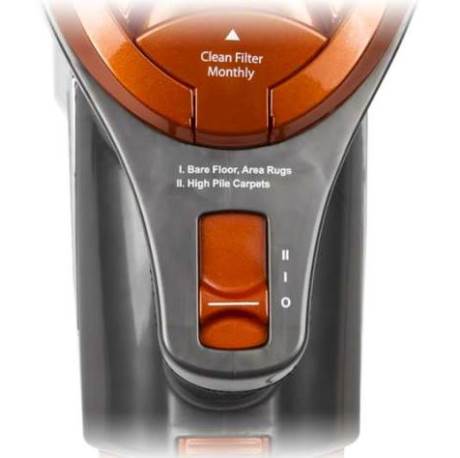 One thing to be aware of is that the Rocket comes with a thermal safety switch.  This switch will shut the brushbar off should the motor start to overheat.  This is designed to ensure the motor does not get damaged but it can be disconcerting if you do not know what has happened. In this case the motor needs to cool before turning the vacuum on again. Shark states that it can take about 30 minutes before the switch resets and allows you to turn the vacuum on again.

Several tools are included although which tools come with which model are something of a mystery (this seems to be common issue with Shark vacuums).  We would suggest checking carefully with the retailer to determine what tools will be provided with your Rocket.  Generally speaking you will likely get:

- A 12 inch crevice tool (a narrow tool that is useful for getting into tight areas)
- A dusting brush (good for removing dust from most surfaces)
- A pet upholstery tool (can be used to remove pet hair from curtains, furniture and delicate fabrics)
- Dust-Away attachment (for dusting and vacuuming at the same time - operates similarly to the Dyson DC56)

There appears to be a deluxe tool package as well as can be seen in the image below (screenshot from the Shark website) but we dont believe this comes standard with the HV302. 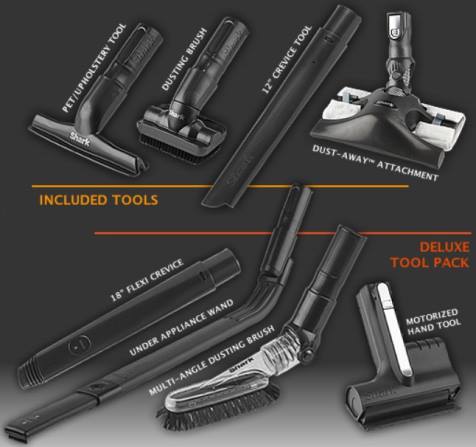 A bottle of Dust-Away and 1 microfibre pad are also included with the machine  these work with the Dust-Away attachment (see video below).  Tools can be attached to the end of the metal wand or directly to the handheld portion of the vacuum.  An accessory bag is provided for tools storage as they do not fit on the vacuum itself.

The vacuum includes a wall mount complete with plastic anchors and screws.  This is a good storage option which makes it easy to access and helps keeps it out of the way.

The vacuum has two washable filters which Shark claim will last the lifetime of the vacuum.  These are both accessed through the top of the handheld unit and there is a felt filter and a foam filter.  They can both be washed with tap water but must be perfectly dry before inserting back into the vacuum (the felt filter goes in first followed by the foam filter).  The Shark Rocket manual suggests the filters be washed thoroughly about every three months and that they may also need occasional quick cleaning (simply tapping loose debris off the filters and into the trash).

The Rocket has a higher profile nozzle than the Dyson stick vacs making it a little more difficult getting under low furniture.  It does have swivel steering however which helps it turn easily with the flick of the wrist.  The cleaning path width is a narrow 6 inches so if you are cleaning a large area you will have to make quite a few passes..  The Shark Rocket carries a respectably long 5-year warranty.

In Summary
If you are looking for a very lightweight upright for both carpet and bare floors then this vacuum may fit the bill.  As this machine is between a stick vac and an upright and because it has a very narrow cleaning path we wouldn't suggest it for large area cleaning - that is probably best left to a more full size unit.  The Rocket is also a good choice if you are frustrated with the lack of power or endurance of your cordless stick vac.  While Shark make an effort to highlight how much cheaper the Rocket is than Dyson stick vacs, there are also other stick vacs out there that are good but not quite so expensive as a Dyson  you can check out our list of Best Stick Vacuums.  And if you are after a lightweight upright we have a list of some good ones here.