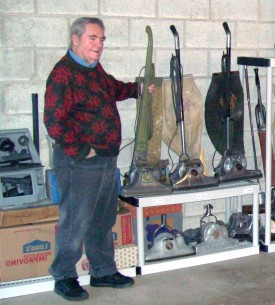 We recently had the opportunity to discuss vacuums with a passionate collector from Pennsylvania.  Robert Alexander Taber, or just “Alex” as he prefers, has made vacuum cleaners his life. As a child, when other children were playing with toy cars, Alex was pulling apart vacuum cleaners.

At the early age of 17, when standing outside an Electrolux office looking at the new machines, he noticed a help wanted sign.  Shortly thereafter he began selling vacuums for Electrolux.  In 1975 he started selling for Kirby and worked with them for over 20 years.

Alex is now retired and lives on a farm in Pennsylvania but the vacuum obsession still runs strong.  He is the founder of the Vacuum Cleaner Collectors Club and continues to work on his private collection.  In our discussions with Alex it is apparent that he is a fountain of knowledge when it comes to vacuums and is also something of a historian on the topic.

We asked Alex some questions about vacuums and collecting. 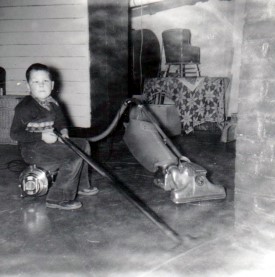 I was around vacuum cleaners throughout my childhood. My grandfather was involved with a boy’s school (Choate now Choate/Rosemary Hall) and let me play in the storerooms filled with discarded vacuums. It was like being a kid in a candy store! I may have only been 10 years old, but I was not playing, I was learning about these Electroluxes, Hoovers and Kirbys.  My grandfather also bought all the vacuum cleaners for the school, and he brought them home to me to test first. I gave the yes, or no.

When I was only 6 years old, I was in a Sears store with my mother and grandmother. As often happened they left me in the vacuum cleaner department. A customer was interested in a tank machine, and I took over, telling her about the machine. The salesman stepped aside and I went at it, showing her the vacuum. Yes, she bought it!

My first job at the age of 17 was for Electrolux and I loved being in the home showing machines to people and getting paid for it. Years later I was between jobs, walked into a Kirby dealership and asked for a job. I got it.  I was then trained and sent out to demonstrate. That position led to further involvement training others to demo.

How many vacuums are in your collection:

What is a non electric pumper?

The history of the non electric vacuum cleaner goes back to 1869. The Whirlwind was the first, but it was made of wood and not made to last. It was invented in Chicago, and manufactured in Boston. Chicago had a major fire in October of 1871, and the Whirlwinds burned like matches. Boston also had a fire in 1872, only the machines in other places survived. The Whirlwind used a hand crank to turn a fan and draw the dirt into a cloth bag.

I began collecting in the fall of 1973, and acquired a two person non electric pumper called the Lakeside. The Lakeside dates back to 1890.

Do you display your vacuums?

In 1985 I bought a house and made a spare bedroom into the museum of the Vacuum Cleaner Collector's Club. The image below shows the room when it's overrun with Kirby, Hoover and other machines. 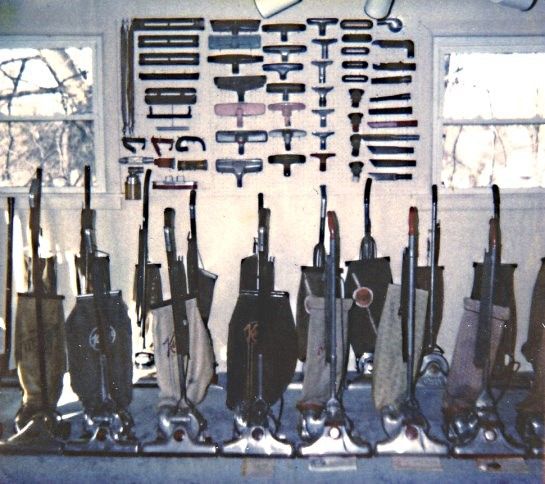 In addition, the photo below shows a part of the museum I created out of a 3 car garage.   As you can see my collection used to be larger but I have since downsized. 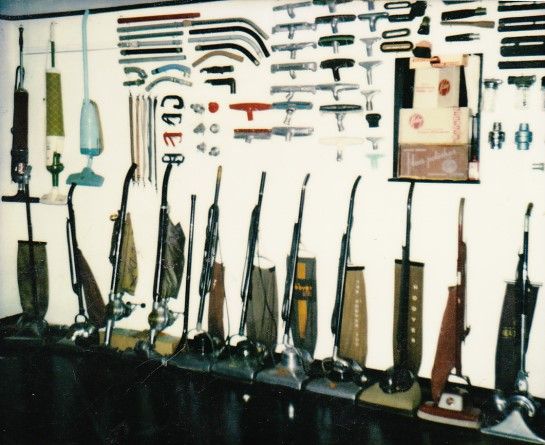 Do you collect vintage, contemporary or both?

I collect vintage only.

What does “vintage” mean in terms of vacuum cleaners?

This changes with the club but vintage means old, antique, outdated. When we first started the club vintage was the non electric, early electric and all machines up to 1960. Over the years this changed.  Personally I go with 1869 to 1950 simply because I like the Electroluxes and Kirbys of the 1940's. In the true meaning vintage refers to the early electric machines of 1900 - 1940.

What makes a vacuum cleaner collectable?

“What makes a vacuum cleaner collectable” is a hard question to answer. For that you need to ask several collectors. For me it's the age, look, style and several other factors.

Is the excitement in the hunt, the restoration or something else?

Both of these plus the research involved - patent searches to determine age, model numbers, and as much other information as possible. I also find excitement in designing a display. Restoration for me is simply buffing metal to a nice shine, and bringing it back to good condition. I keep all parts original to that model. I don't interchange parts unless I have to.

Do you remember any particular vacuum hunt? 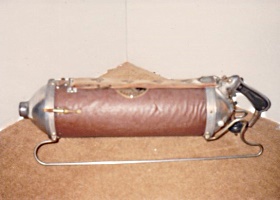 Like the day I put my foot in my mouth? Here's the machine - see image left - an Electrolux model V (5) of 1924. I was living in Chicago at the time, saw this in the window of a vacuum shop and asked to buy it. "Not for sale" the guy told me. "Anything is for sale at the right price" I said. I told him I'd meet his price, and he named a huge figure at the time, $500.00. While I was only 24 years old I was not one to go back on my word, I gulped, and asked "will you take a check?" An hour later I went to a friend, told him what I did, and said I'd work for him for the next year if he'd cover the check. He did! I got the Electrolux!

This taught me a huge lesson, never blurt out you collect anything, and don't be so overconfident that you box yourself into a corner. Needless to say it's the most expensive collectable I ever got.

How do you track down a new acquisition?

I acquired my vacuums in numerous ways - garage sales, trade-ins, simply walking into vacuum shops and asking what was in a basement, or through members of the club. In addition, I gave a number of them away to my friends who showed interest in a particular machine.

What was your greatest find?

My greatest find was the Whirlwind, a non electric, hand crank upright that was patented on June 8, 1869 by Ives W. McGaffey. It was invented in Chicago, and was manufactured in Boston. This is an extremely rare machine and only 5 are known to exist (see image right).

Can you tell us a bit more about how you managed to get one?

All my early non-electric's like the Lakeside, San-Vac, and so forth came from a friend who was an antique dealer in New Hampshire. He got them at auction and contacted me. But this was not the case with the Whirlwind.

A friend contacted my mother telling her he'd just gotten a wooden upright non electric, and did I want it? He'd bought it for $200.00 at auction and had no idea what it was. My mom bought it but asked him to keep it till Christmas. In the meantime I'd been to Hoover and saw a series of non electrics and also seen the Whirlwind on display. On Christmas morning I opened the box and almost fainted. While there was no bag, just an old pillowcase, and no drawstring to work the fan it was a Whirlwind. Fact is, nobody knew what a rare machine this was.

What is your prize machine?

My prize machine is the Electrolux model LX (60) Introduced in early 1952. Why is it special? It ejected the bag when full, and to a 2 year old it was funny. 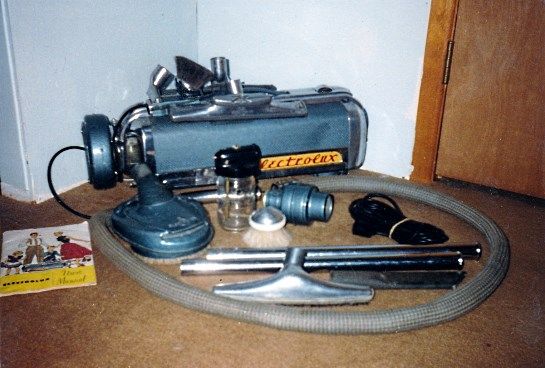 If you could have any vacuum regardless of cost, rarity or price what would it be?

Several come to mind.  The first of the Hoovers, the model O, called The Electric Suction Sweeper. I'd also have a Domestic Cyclone, a Grasshopper, and an upright called the Broomstick.  These last three were invented by James B. Kirby between 1906 and 1912.

What makes these exciting?

Very few exist, and as an historian I would love to acquire them. But with respect to the Kirbys, only the Kirby company has them.

What are your favorite brands and why?

My favorite brands are Electrolux and Kirby.  I like the design of both, but especially those from the 1950's.

Are you a member of any clubs or associations related to vacuums?

Can you tell us more about the club?

The Vacuum Cleaner Collectors Club began with my trip to the Hoover Historical Center in North Canton, Ohio in August of 1980. As a private collector I was treated V.I.P. all the way, and left with tons of pictures, patent info, and other data.  It was about a year later that I got a letter from Hoover forwarding a letter to me. It was from John Lucia seeking information on 2 Hoover models – the 150 and the 700. Up to this point I thought I was the only 'nut' on the planet into vacuum cleaners. So I answered his letter and the friendship began.

Cut to the spring of 1982. John was planning a cross-country trip to see the United States and I was living in Indiana, so as Hoover was on the list, we went together. Another V.I.P. treatment for both of us and when we left we had 5 names of other collectors. I asked John if we should form a club. He said "I doubt if these people will be interested, but write them and see." I did. That was September of 82, and on January 2, 1983, the club officially started with 5 members.

It started out as a teaching club, and resource center. The focus was the history of a given company, patent information, restoration and or repair and other related topics. The club now has thousands of followers.

Do you have any advice for upcoming vacuum collectors?

Spend as much time as you can on Wikipedia researching machines, lean on the experts, ask all the questions you can, and don't be discouraged if somebody asks you, "you collect what”?  There are several clubs out there, join one and follow your dreams.