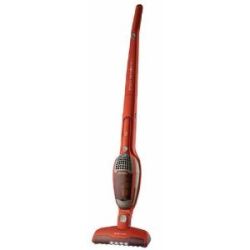 The latest Ergorapido has one major improvement over previous models  the Lithium Ion battery.  Lithium Ion batteries recharge must faster than the NiMH batteries used in older Ergorapido models and they also provide fade-free power.  The new 18V battery also ensures strong suction for a stick vac.  Owners Like that the vacuum is lightweight, maneuverable and comes with a built-in handheld vacuum.  It is great on hard surfaces but like many stick vacuums it is only average on carpet.

Consumer input has been found on a number of retail websites (see table below).  These have been updated in 2016.  The average of the consumer ratings in the table is about 3.9 stars out of 5.  Like many vacuums, when the EL1030A was first released it garnered much higher consumer ratings but over time the ratings drop as owners experience issues often due to the aging of the machine.

Lithium Ion batteries recharge some 4 times faster than their NiMH counterparts and they also output sustained power until they are fully discharged (sometimes called fade-free power).  This last point has been confirmed by owners.  The new battery does not appear to have any downsides and Electrolux have managed to add this beneficial feature while keeping the vacuum weight fairly low at just over 5 lbs.

There are two power settings on the Ergorapido Ion - High power and Low power. High power will, of course, run down the battery charge faster than the Low setting. On high power the vacuuming time is reduced from 30 minutes to 16 minutes.

Included with the vacuum is a charging stand where the vacuum is typically stored as well as charged.  The charging unit is Energy Star rated which essentially qualifies it as being environmentally friendly. ENERGY STAR is a joint program between the U.S. Environmental Protection Agency (EPA) and the U.S. Department of Energy. The program involves protecting the environment through energy efficient products and practices - so if a product is Energy Star rated then it has met strict energy efficiency guidelines set by both the EPA and US Department of Energy.

This is a cordless, bagless stick vacuum that uses cyclonic suction.  The dirt canister capacity is 0.4 quarts which some owners have commented upon as being a little small.  It has dual filters which can be cleaned by simply shaking them or rinsing them in warm water (please note that they must be completely dry before placing back in the vacuum). 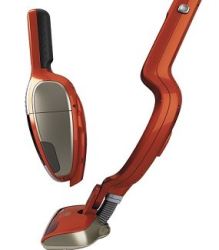 The vacuum is lightweight and very easy to maneuver, and the nozzle head can swivel a full 180 degrees.  Other features include a headlight, a brush tool and a crevice tool (which store on the charging unit), an 8.3 inch wide cleaning path and a motorized brushroll.  Also, the EL1030A sports a 2-in-1 feature which allows the stick vacuum to become a handheld vacuum when needed.  Transitioning to a handheld vacuum is easy (as reported by owners) and two release buttons on the side of the vacuum free the handheld section.  Both the handheld unit and main vacuum have on/off switches on their handles.

Owners Manual
If you wish to read more about this particular vacuum you may want to check out the manual.