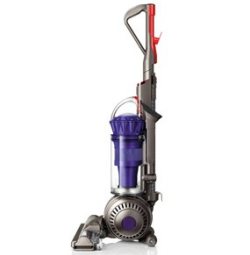 The Dyson DC41 is a fairly new product from Dyson (at the time of writing).  It is their latest Ball Upright vacuum cleaner and reviews are quite good to date.  The DC41 has undergone significant redesign to optimize performance and the result is a very powerful machine with automatic nozzle height adjustment (and a few more upgrades).  Consumers like the long power cord and the machine's ability to pick up pet hair, but some find that the vacuum profile makes it difficult to get under furniture.

Consumer ratings are limited at this time but several were found and are compiled in the table below.  These provide a fairly good average score of 88 out of 100 (or 4.4 stars out of 5).

Many owners compare this unit with the DC25 Animal.  Most indicate that they like the DC41 Animal better but not all.  The main differences between the two are as follows:

There are a number of other updates and differences as well but the key ones are highlighted above.

Probably the two areas of greatest discontent with the Dyson DC25 are the small dirt canister and the short power cord.  Dyson has clearly understood this and with the DC41 they have added over 10 feet of length to the power cord and increased the dirt canister capacity by 77%.

The DC41 uses what Dyson is calling Radial Root Cyclone Technology.  This technology has been patented by Dyson and involves remodelling the airflow to maximize suction power.  As can be seen in the statistics above the DC41 has very strong suction power at 235 Air Watts but it should be noted that this is actually the same as the DC28 (and slightly less than the DC33).  The DC41 is powered by a 12 amp motor.

The Dyson DC41 Animal has an active base plate (see video link at bottom of review for a good look at this feature).  The base plate automatically adjusts moving the nozzle (with brushbar) up or down ensuring an optimal cleaning distance from the floor surface.  This approach minimizes air leaks between the nozzle and the floor surface and ultimately directs more suction to the floor.  It is an especially helpful feature when moving from hard surfaces to carpet or vice versa.  Many other machines have multiple height settings but these are usually limited to a number of fixed settings and are also often set manually  via knobs or foot pedals.

This Dyson Animal is the latest to use the now famous Ball Technology.  Following is a great video showing how this works and how it was originally devised.  Instead of a vacuum that travels on wheels, the Dyson Ball vacuums literally spin around on a ball, thus enabling tight turns and great maneuvrability.  The ball houses the motor and filter and this helps to create a low center of gravity making the machine easier to move.  The Ball is said to make cleaning in cramped spaces and around furniture much simpler. It should also be pointed out that consumers often really like the maneuverability they get with the Ball design but some never quite get used to it.  Dyson states that the DC41 has less clutter than previous units around the ball (you can see in the vacuum images that this is true) thereby allowing the vacuum to get even closer to furniture or other objects.

A number of tools and attachments come with the DC41 including;
- Combination crevice tool and cleaning brush
- Stair tool.
- Mini turbine head.  Useful for pulling up pet hair and dirt from stairs, upholstery and vehicle interiors.  It attaches to the hose or the wand.

The DC41 sports a telescopic wand and a 14+ foot hose.  Attachments fit on the end of the wand or the hose and click into place as opposed to being friction fit. 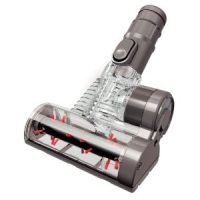 If you are considering a Dyson you probably already know that these are bagless machines.  They do not use disposable bags but rather have a dirt canister which is removed when full, emptied, then reattached to the vacuum cleaner.  There is a long standing debate about which type of debris disposal - bagged or bagless  is better.  Bags tend to make it easier to dispose of the collected dirt as you simply throw away the bag and put a new one in. However bagless machines do not require that one purchase and then throw away bags, but they can be messy to empty and sometimes require extra filtration.

The dirt canister on the DC41 is a respectable size at 0.55 gallons.  This is substantially larger than the 0.31 gallon dirt canister on the DC25 but still a little smaller than those on the DC33 and DC28 which are both 0.61 gallons.  The DC41 dirt canister is quite easy to empty, a point made by a number of consumers.  It is emptied via the push of a single button limiting any contact with the dirt and dust within.  The canister is also clear plastic so one can see when emptying is necessary.  There is no indicator on the vacuum to tell you when to empty the canister.

There are a few comments that the DC41 Animal is a little heavy but at 17.4 lbs it is only 1.3 lbs heavier than the DC25 and it is about 3 lbs lighter than the DC28.  All-in-all the DC41 is perhaps just slightly heavier than average for an upright but not much. 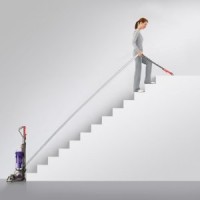 Like most other Dyson vacuum cleaners the DC41 has HEPA filtration.  HEPA stands for High Efficiency Particulate Air and it is a level of filtration that is capable of removing 99.97% of all particles with a diameter of 0.3 microns or more.  This includes the likes of pollen, dust mites, pet dander, mould spores, ragweed and many other allergens.  For this reason HEPA filtration is quite popular with folks suffering from allergies or asthma.  All filters on the DC41 are lifetime washable which saves money over the life of the vacuum.

Additional features include a 13.5 inch wide cleaning path (about average), a power on/off switch and a brushbar on/off switch.  The brushbar on/off is quite important as it allows the vacuum to operate effectively on both bare floors (brushbar off) and carpet (brushbar on).  The brushbar is also motorized  as opposed to being driven by air which is the case on some machines.  As mentioned previously the DC41 sports a 35 foot power cord but it does not have automatic rewind.

The Dyson DC41 Animal is both UL and ETL listed.  ETL is a group that performs electrical and reliability tests on products to ensure they meet US product safety standards, and UL is a not-for-profit, independent product safety certification organization in the US.  In addition, the DC41 carries a 5 year parts and labor warranty.

Vacuum Cleaner Video
This is a rather Long HSN Dyson DC41 commercial but if you are considering this machine it will provide a great look at many of the vacuums features.